It’s definitely true that there’s never a dull moment when you race National Hot Rods.   There’s always something to do and even when you say the car is ready you always find just one thing to check or change, the list is literally endless.     I think you could spend all day, everyday working on the car and still find a job to do!    Unfortunately I’m not in that situation and like the rest of us have a job to go to during the day.   This means Hot Rod time is solely confined to the hours between dinner and bed, the latter varying greatly depending on how much needs to be done!
After a good meeting at Aldershot it left us without much to do, just the usual ‘in between meeting’ things, and seeing as it was straight off to another small track we didn’t even need to change a diff.    Dad still wasn’t convinced that the engine was sorted so he arranged with Phil Spinks to run it on his dyno.   Once again, me not being able to tow the trailer proved to be a pain - with Dad getting up at 4am and heading down to with the car, and leaving me to open up at work.   We both headed down after work to collect it again.   Phil had got a bit more power out of it, and having driven it since, you could really feel the difference it made.   It’s a pretty amazing set-up he’s got, with the dyno bolting straight onto the rear hubs of the car rather than having to drop the wheels down onto a rolling road.
I don’t want to tempt fate by saying this but the engine in my car really is a cracker.   It’s pretty old now and apart from it acting up the other day it’s given me very little trouble.   It smokes a bit when you put your foot down but I can’t see that from the driver’s seat so I’m not going to worry about it.
In amongst all my other ambitious - probably never get done – plans, is a 2.8 .   I bought it at a good price, did 80% of the work on it then sat it back in my garage and promptly forgot about it.  But my “good” friend Jason Kew obviously has too much free time on his hands, and as well as running a National, enjoys going out and destroying good cars in the Bangers.   He had a pretty tidy Capri Special with some nice bits around it, so it seemed only right that I should relieve him of them and put them onto mine!  What started out as just a few bits soon turned into pretty much a complete strip, leaving me with a sprinter van load of bits to find a home for.    I think Jason quietly hoped a night down there with him would convert me into a Banger fan - but I’m afraid he has a long way to go yet!
With the car all set and the weather really nice, once again we set off to for the annual Good Friday meeting.    We left early to get to the front of the queue but when we arrived it seemed that everybody else had the same idea and the queue of transporters went nearly back to the road. We got in and parked next to Gavin, so it was already a foregone conclusion that there would be some sort of prank thrown my way, but everyone was well behaved and I got off lightly.   No doubt they’re saving it all up to get me with something big next time I see them!   We always have a good joke and it’s always meant in the best humour.   Makes life exciting and keeps me on my toes! 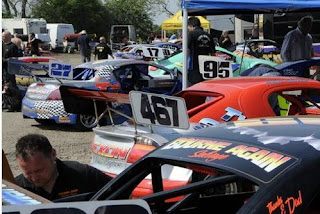 I can’t really work the meeting out if I’m honest; the car has been brilliant all year and for some reason completely unbeknown to any of us it didn’t feel as good.   Nothing had been altered or adjusted but it just didn’t feel right.    Luckily, Sonny was on hand and made the car better for every race.    The first race I came home just out of the points.  The second I had a tenth and the final was somewhere around fifteenth, so although not the points I had hoped for, it was still points nonetheless!   It could be those few points that make the difference between qualifying or not come July.
I don’t want it to come across as a ‘moaner’ or a ‘sore loser’ - I’m just a bit confused as to why the car was so different.   I still enjoyed every lap I drove - the weather was great, the atmosphere was good, and after all, I was still racing a National Hot Rod!    I’ve said it before . . . . as much as I would love to be on the grid in July and I’m going to give it 100% to make sure I am , I’m not going to let it ruin my life in the process - racing is meant to be enjoyed at the end of the day.
With the car looking a bit tatty, but still straight after the final it was loaded back in the trailer ready for the work to begin again.   We’re going to check everything is working as it should be, strip the brakes down and check them all over and spend some time with the paintbrush making it look somewhere near presentable again.   With only a week to go I’m sure the next meeting will be here in a flash!   Hednesford has never really been my favourite track but it has grown on me in recent months.   I’m looking forward to getting back out on what is definitely the fastest track we go to.   I’ll see you all there!
Thanks as ever for reading
Mikey
Posted by Mikey Godfrey at 8:43 AM