Well, it wasn’t the start to the season we’d hoped for - but that’s Hot Rod racing and you have to take the rough with the smooth I suppose!    We looked at the car after Hednesford and it wasn’t that bad, just a split wing and a bent wheel.   With the wing sent off to Boss to be repaired and the use of a spare wheel we quickly had it all sorted and ready to roll again.  Luckily the axle was straight so that saved a job, and with Mark Skitmore being a top bloke, he even managed to rescue the printed picture that runs down the side of the car saving everyone a bit more work.
We arrived at and I went straight out to practice.   After doing two slow rolling laps the bonnet started to flap up and not wanting a repeat of I pulled into the middle and gave that run up as a bad job.    My Dad was straight there after the practice and clipped it back on and I headed out for another go.   Things were better this time and the car was really flying, so back to the pits ready to get started.
The first race set the tone for the night really, with me ending up spun out and facing the oncoming traffic and backed up into the wall.   I managed to reverse up into the middle of the bend and survived the duration of the race without anyone wiping the car out, so that was lucky I guess.

Back in the pits after the race things turned a little ugly and I apologise to anyone who caught wind of my language and shouting aimed at my Dad.   It was childish and unprofessional to say the least. I’m sure most of you know that I get on very well with Dad as a general rule.   We live, work and do the car together, but he was annoyed with me, so I got upset and things got a bit carried away. Unfortunately my Mum and cousin had come to watch as well, and it was just shambolic all around on my part.   Sorry to any of you who witnessed that . . . .  I’m not a mental case, really.
The second race was worse than the first for some reason.   I was struggling with too much back brake, and although the car was going well, it was trying to spin into the bends because the back brakes were locking up too much.   This resulted in me getting spun out again and ending up on the infield.   Now I can honestly say what happened next is easily the most weird and hardest thing to explain since I started racing.   I pulled back onto the track and set off to get going again.   As soon as I reached the first corner the car was all over the place and I was convinced it had a puncture.   I would have bet my life savings on it in fact, so it was back on the centre and another race lost only to find all four tyres fully inflated and nothing at all wrong with the car.   Very strange indeed and something that will puzzle both Dad and me for a long time. 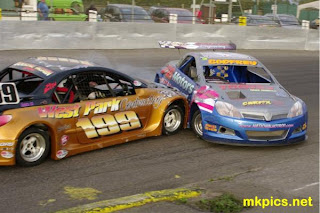 I was 99% sure we hadn’t qualified for the final so didn’t really bother doing anything with the car; in fact it was ready to load into the trailer to go home.   Just as I was walking up to the track to watch the race, Garry Staines tapped me on the shoulder and said there were cars struggling to make it and I could be in.    I’d lost my Dad by this point, so I collected a few people to help me as I rushed down the pits and we got the car ready and I headed out.   I’m sorry I didn’t catch everyone who was there in the end but a massive thanks to you all for helping me.   That’s just another example of how there are some really good people at racing.   None of them were there to help me, and all had cars on the track to support but they all took the time and got me out there - so thank you.
Looking back now I wish I hadn’t gone out for the final as it was definitely the lowest point in all my years of racing.  The car was going much better and things were going well until I got tangled up on turn four and ended up heading straight for the fence.   It was just one of those moments when you knew it was going to hurt - and sure enough, it did.   I think the car hit the fence, spun round then ended up stopping on the straight somewhere near the start/finish line.    The next thing I saw was Gavin Taber locked up on the brakes and trying to miss me.   Unfortunately it wasn’t to be and he went straight into the back.    Luckily though he had slowed up so much he escaped any serious damage and was able to carry on and finish the race.
My race was most definitely over though, and once I’d caught my breath and realised what was going on, the car was dragged onto the infield so the race could be restarted.   It looked a sad sight, with wheels pointing all sorts of directions and broken and mangled panels everywhere.   When the race was finished it was dragged back to the trailer, and with many willing helpers we managed to manhandle it into the trailer and shut the door!
It does look pretty sorry for itself but it will all repair!   I’m going to stay with John for a week tomorrow so it can remain in the trailer until I’m back.   I won’t be out at Hednesford or , but one thing’s for sure – I’m definitely NOT quitting!   I can use another of David Casey’s fine quotes here, and at the moment “If it rained soup I’d have a fork”, but we all learn from these things and luck changes, so I’ll be back.    I’ll always be back; it’s in my blood . . . it’s my life.
On a slightly different note - Jason Kew and I have known each other for years.  Occasionally we see each other away from the track, and the other evening Jason and his mechanic Dave turned up at my house in a brand new Nissan GTR that Dave had got from work.   After spending a good hour tearing up the Oxfordshire countryside we decided that it’s an awesome car and that we should sell our Nationals and buy one!   With the ‘launch control’ on, it is honestly like a missile off the line, definitely a good evening’s entertainment!
I think that’s me about done for another week, massive thanks once again to everyone who helped me at the weekend, it really is very much appreciated.   Ross and I are going up to stay with John for a week and do some fishing.   Just the recipe to cheer me up a bit.   I won’t be writing anything next week, but I’ll be back after that to tell you how bad the car is and what we’re planning to do with it!
Thanks as ever for reading, and rest assured this is only a little setback, and not the end!
The boat’s ready and is calling.
Until next time
Mikey
Posted by Mikey Godfrey at 12:45 AM