This is a blog I hoped I’d never have to write.  It’s hard choosing the right words to do David Haird justice; the world of Hot Rod racing has lost one of its best and it will never be quite the same without him.

My first encounter with David and his family was one day in February 2009 when we turned up at his house to order a new Tigra.  Anywhere else you would have been given a tour, told the price, done the deal, paid the money and been on your way back home again . . . but not at David’s!  After numerous drinks and a long time spent chatting in his living room we finally got round to talking about the business of buying a car.  I had just turned 19 at the time and looking back now had a plan than was far beyond my means but David listened to me and trusted me.  We left his house many hours later with the car ordered and the promise that I would pay for it when I could.  Without him trusting me I would never have been able to have a new car and very much doubt I would still be racing Hot Rods now.

David promised me the car would be ready for the NEC the following January and he was true to his word.  We picked it up before Christmas and spent a few weeks finishing it off and personalising it.  Seeing my new car on the Haird stand at the show was one of the proudest moments of my life and David did everything he could to make it special for me.  There was nothing he liked more than seeing other people happy, whether that meant winning a race or enjoying a night out.  Whenever you were with him a good time was never far away!  That NEC weekend was brilliant and I will always look back over the antics and laugh. 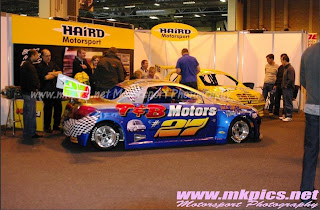 I’ll never forget one particular night after a test day at when a group of us went out for a meal in .  After what was a pretty civilised meal a belly dancer appeared and after a few hushed words in her ear from David she dragged me up onto the table in front of everyone!  Needless to say they all found it genuinely hilarious whilst I almost melted with embarrassment.  To make it all worse someone videoed it and put it on YouTube.  Good luck trying to find it though!

The help and support from David didn’t stop as soon as the car was built and he was always willing to help with spares and advice.  He had a way of making me believe in myself even if at first I didn’t think it was possible, and I’ve lost count of the times he talked me round and made me see sense when I was making threats to quit or telling everyone that I’d had enough.  One meeting at Hednesford I hit the wall coming out of a bend and destroyed the car.  Every corner was damaged and it looked very sorry for itself.  Once again it wasn’t a problem though and it went back into the Haird workshop only to emerge straight again ready for the next meeting.

All the time we knew him David was struggling with his illness but he was always so strong and kept on fighting and fighting.  To me he seemed invincible and I really can’t believe that he’s gone.  His business card is pinned to the wall above my desk and I keep looking at it with fondness and immense gratitude for all the support and genuine kindness he showed me and I think back to all the good times and smile.   He was a great man who helped and influenced so many people over the years and it’s been an honour knowing him.  Even though I only knew him a short time compared to some people I could fill several pages with great stories!

I was very lucky to class David as a friend and I can never thank him enough for everything he did for me and for believing in me and trusting me when so many others wouldn’t even give me the time of day.  I may be a single voice on here but I speak for many when I say “You will never be forgotten and certainly never be replaced.”  I feel sure that right now David is sitting looking down on us all with a cigarette in one hand and a drink in the other . . . and he’ll definitely be watching over Foxhall Stadium the first weekend in July!  Thank you for everything.  Rest in peace.

Mikey
Posted by Mikey Godfrey at 1:06 AM