The best weekend - with the worst luck


After all the hard work and long hours spent in the garage during the build up to the World Final it was over in the blink of an eye.  Unfortunately I didn’t ‘stay lucky’ but what an experience it was and I would do it all again without so much as a second thought.  I can honestly say it was one of the best weekends I have ever had.

My friend Neil, my cousin Ed and I had a mad panic at work on the Friday morning so we could get everything finished, come home and polish the car, then head over to Felixstowe to meet John and all the boys at their caravan park for the night.  This itself turned into a complete drama with the Friday traffic around London turning what should be a three hour trip into nearly a six hour one.  When we did finally arrive though it was a great evening and made a change to see everyone on home turf without me heading north of the border!

For me, Saturday was the best day of the weekend and a great chance to catch up with the people I only see once a year.  It was an early start though as we had to head off into Ipswich to get John’s car from TPR signs who had pulled an all-nighter doing the stickers!  Considering they had the car less than 24 hours, had designed it all, printed it all and stuck it on, I think it came out looking brilliant.  Just by luck we met my parents going into the stadium with the lorry so we managed to get ourselves parked together and get our little team base set up for the weekend.

One of my favourite bits of the weekend is seeing what developments people have done with their cars and who has brought something new out.  It’s always exciting when someone opens up the door to their race transporter for the first time.

I will sit here now and admit that the idea of the hot laps scared me!  You know that all the people in the stadium have their eyes fixed on you going round.  Many of you are fully aware that I’m known for doing stupid things and I had visions of planting myself in the wall or going spinning off into the speedway track, things that would not only be highly embarrassing but I would never ever be allowed to live them down.  I was lucky and drew thirtieth which worked well because not only was the track good by then, but it also gave me chance to watch all the fast guys from the best seat in the house.

The pressure you put on yourself as you strap into the car is pretty intense, and as you pull onto the track it feels like everything slows down and you become much more aware of everything you and the car are doing.  It’s a completely different feeling to that of racing on the track with 30 other cars.  My first lap was terrible but I pulled myself together for the second and third.  Sonny had made a change to the car and it did exactly what it needed to.  I pulled off convinced my time had been awful though, only to find my dad smiling and that had to mean good news!  I had hoped to do a 14.8 and had done a 14.76 so overall I was pleased with that. 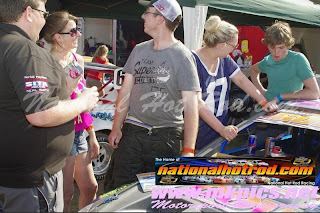 The rest of the day was spent chatting and wandering round seeing everyone.   We had a barbeque in the pits and it was great meeting so many people during the comfort break.  I’m sure most of you know I don’t really watch much racing but I enjoyed the support races and watching Adam Maxwell - who was entirely in a league of his own out there and 100 percent deserved his place in the World Final.  I enjoyed watching the 2.0-litre World Final too, with Shane Murray just driving home the fact ‘he is the man’ and taking home a great win.  It was good to see my friend Adam Hylands with a second place too - a major win for him can’t be far away now?

We had a hotel booked for the Saturday night so after the racing it was back there for a much needed shower and a few hours sleep.  It was another early start though, and through planning rather than luck we found ourselves in the same place next to John on the Sunday morning.  We did a few last minute jobs to the car and then that was us ready for the big race.

Now, to me the build up to it all and the parade lap is the best bit of the year for me.   The car looked awesome, the weather was beautiful and I had all my family and friends pushing the car out with me.  It’s such a great feeling when you step out onto the track.  After the photos and interviews, and when the grid is formed, it’s time to get strapped in and ready to go.  This is the point my emotions tend to get the better of me, especially this year.  After all that has happened it’s hard sitting in the car as you hear ‘Just Drive’ playing throughout the stadium.

From the minute you start the engine and the adrenaline kicks in the atmosphere changes again.  It’s a brilliant feeling as you roll round on the two warm up laps.  Looking across and seeing Keith Martin starting next to me was very surreal because I always used to watch Keith as a kid, and in a sense it almost felt wrong that I should be there.

As you come round for the green flag everything else is forgotten and all I wanted to do was get in onto the inside line.  It all started off really well for me and in the first lap chaos I managed to move up a good few places.  It wasn’t to work out though, with the red flag coming out after mayhem in the score board bend, and a full restart was the order of the day.

I can honestly say the next ten minutes just sitting in the car were some of the hottest of my life . . . I was glad to get going again just to get some airflow coming back through into the car and I was rapidly running out of water too.  Now from this point on the disaster started to unfold.  I couldn’t get in off the outside line and quickly got myself railroaded backwards.  I did finally get back in and you really couldn’t write what happened next into even the best story.  As I came into the turnstile bend I was to find John mid-spin in the middle of the track.  I was left with absolutely nowhere to go and the inevitable happened - we collided putting us both out of the race.  It was just one of those things that happens, it’s racing and no-one’s fault, and just completely unavoidable.  It’s laughable now that after a whole year of hard work we did six laps and ended up taking each other out.  We’re still the best of friends though and ended up with a superb view to watch the remainder of the race!

It was an eventful race and absolutely gutting for Chris Haird.  A massive well done to John Christie though - and Jason, Glenn and Danny!  Having known Jason pretty much my whole life I would have called you a liar if you had said 15 years ago we would both have been starting the world final.

Back in the pits and unfortunately my car was bent in all sorts of places so was loaded up into the lorry to be looked at when we got home.  The boys and dad got John’s car repaired though and he headed out to do the last two races.  I think the Best in Britain was a cracking race and brilliant to see Glenn win.  It was also great watching Robert McDonald come charging forward from almost the back of the grid to get himself right into the thick of it all.

All in all it was a brilliant weekend with the best people you will ever find.  It was great to have my family and friends all in the same place.  I had talked about taking some time off from racing after the World, but the bug bit too hard and I have found myself booked in for the National Championship.  As usual it’s going to be a panic to get there - but what’s new?  The car is currently having at little holiday at Sonny’s being straightened, then it will be all hands on deck getting it put back together!

Thank you to everyone who made the World Final possible - hopefully I’ll be there again for another try next year!  I’m determined that one day I will finish a major championship!

Thanks as ever for reading.

Posted by Mikey Godfrey at 2:18 AM