I can’t believe that it’s Christmas again - another year has flown past.  The fact there’s not been any racing for a few weeks hasn’t slowed things down at all and I’ve been busy working on the car and visiting friends during the run up to the holiday season.

I’m delighted to report that for once I’m pretty well organised and the bulk of the work on the car is actually done!  It’s currently at TPR Signs getting its stickers and when it comes back here we have to change the diff, check everything over, set it up and it’s ready for the Live Action Arena at the Autosport Show in January.  Oh, and the wheels - well, I keep putting them off.  The idea of stripping them all down, painting them and rebuilding them doesn’t exactly fill me with Christmas cheer!

As the Tigra has been blue and silver since it was built in 2009 I decided to change things a little for 2014.  I really like the blue and have a garage full of spare panels that colour, so I’ve kept that the same, but the top half of the car has been spayed in a crisp frozen white.  Our company colours are blue and white, and my dad’s rally cars were always that colour too, so it just seemed a natural choice really.  There are a few little details left to do whilst it’s at TPR but I’m really happy with the result so far. 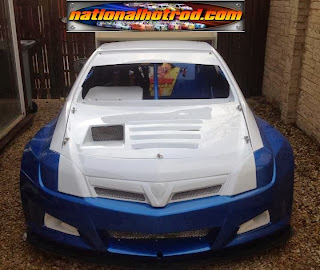 With December being my birthday as well as Christmas there’s always plenty of celebrating to be done, and so far this year has lived up to all expectations.  A pretty hectic weekend in Scotland for my friend’s 21st was followed by an even more hectic night in Northern Ireland for my own birthday.  What was meant to be a quiet country music concert was turned into a pretty rowdy event when twelve of us arrived . . .all I’m going to say is the twenty-foot Christmas tree was very lucky to survive the night unscathed after it was nearly brought tumbling to the ground!  It was a brilliant night though and a birthday I won’t forget in a hurry.   Thanks to everyone who made it such a good couple of weekends.  I managed to travel thousands of miles, visit three airports and drink beer in three countries all in the space of a week!  Pretty proud of that one - although maybe I’m now old enough to know better?

I’m very excited to say that I’ve been given the opportunity to head out to Cape Town in South Africa to race next February.  It’s a large shale oval which races Hot Rods similar to the cars here, although they run larger engines.  It’s a once in a lifetime chance; my flight is booked and I can’t wait to head out there.  Two weeks of sun and Hot Rods sounds perfect to me.

With lots going on at work it’s going to be a short Christmas this year, but I’m looking forward to spending a few days with my family - without any mention of racing cars or van spares.  These are pretty much my dad’s and my only topics of conversation and I think at times we must drive my poor mum mad.  I’m heading off to Scotland for New Year to spend it with John and all my friends.  He’s having a party . . . he just doesn’t know it yet.   Oops . . . he will now!

I hope you all have a great Christmas and New Year.  I’m sure I’ll be blogging again before the NEC but if not I’ll see you all there.  Make sure you all drink far too much and party way too hard - I’m sure I will!

Thanks as ever for reading.